1) Dragonhunters is finished and rewritten and waiting for the editor. Soon.

B) I will be attending Libertycon in Chattanooga, TN June 27-28 as both my scientific and authorial self.

iii) A review of The Long Way Home that made me cackle maniacally. If keeping people up late reading is a sin, I am beyond doomed because it seems to happen a lot (and yes, I do it on purpose!)

Also, the Clarion West Writeathon is starting up. I am taking part as always, to help new writers who will go on to write new stuff for us to read. This year, one of the students is a member of my critique group who writes very unique fiction, and I confidently expect Good Things to come from him.

As the release date for Dragonhunters is finalized I am planning some promotional goodies such as a Goodreads giveaway, temporary price discounts, etc. Stay tuned…

All the cool kids are doing it. Unlike some people, I do not have Vast Quantities of gaming figurines, but I made do. Quality has a quantity all its own. And Commanding Officer Jane Austen is most definitely Quality. 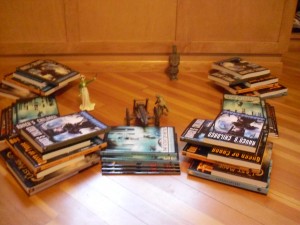 Those are NOT sloppy piles of books! It’s a glacis! Miss Austen clearly has studied her Vauban, and prefers trace italienne defenses for her (alas!) single cannon, fortunately crewed by a very strong (and deaf) Sandcreature. The Chinese golem is held in reserve. 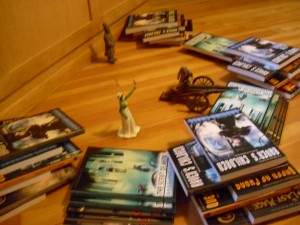 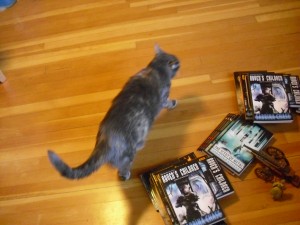 I tried to come up with a compelling narrative for this vignette, but the beta readers complained that it was too much of a felis ex machina, so I trudge back to rewrite. Literary combat is hard. 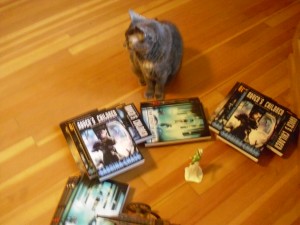 Yeah, what’s my motivation, anyway? Nothing here tastes like chicken.

(The part of Giant Space Amoeba played by Senior Ranking Cat Opal, who would like to be fed now, thank you.)

Submitted for your consideration …

The sad truth is it will take a while for me to get my full publication list in audiobook format. The cost of doing what I consider to be a decent job is…significant. The royalties (so far) on my one audiobook have not been large. I know some people really love audiobooks, however, so I wanted to alert my readers to a possible alternative.

For the Kindle Fire, at any rate, CoolReader is apparently a decent substitute for a real human reading the text. I have not tried it myself, but there is a video review of the app in action at the link, and it was brought to my attention by one of my readers who claims a) to have read all of my books (making her intelligent and a good judge of literature) and b) that all of my books work well with this app (apparently DRM or other code hijinks in a book can give it hiccups. But not mine!)

The reading voice does take some adjusting to, I originally described it as “Like GLaDOS but without the warmth and personality.”, but now find it to be pretty reasonable.

The Clarion West Write-a-thon is upon us! My page is here. All funds raised go to provide scholarships for Clarion West, a six-week intensive writing workshop. Professional writers and editors, well-known in their fields, teach week-long segments to aspiring speculative fiction writers.

Times are hard for a lot of people, I know, but if you can invest just a little in the future of some writer who may later knock your socks off with a kick-ass story, please do. It all adds up. And we all need good stories…

Many, many thanks to those who have already donated to the Clarion West Write-a-thon.  I have been writing furiously to hold up my end of the deal. Weekdays are never good–the pesky day-job intrudes–but I hope to make much progress this weekend.  And check out the other writers that are taking part! A wild and wonderful group, some of whom are former students so you see, it works!

I’ve been involved for several years supporting Clarion West, a speculative fiction writer’s workshop based in Seattle.  For six weeks, instructors and students take part in an intensive writing bootcamp focused on improving their craft. Not many people can afford seven weeks away from work and home, not to mention the tuition costs, so those of us who are supporters fundraise to help it all work.  I am committing to finishing my work in progress, The Scent of Metal, during the course of the Clarion West Write-a-thon, which starts today.  My goal is a measly hundred bucks.  If I raise that much I will put two (2!) chapters of that book up on this site for all to read.  Is that a deal or what?

The author of Julie of the Wolves  and more than a hundred other books has passed away at the age of 92. A fighter to the end, Ms. George was party to a lawsuit to enforce her right to license ebooks of her own works, a right the paper publishers claim was theirs even though ebooks did not exist at the time the original contract was signed.

I loved Julie of the Wolves, and the thought that her last year on Earth was burdened with a lawsuit…well, Anubis pursues the evildoer, in this world and the next.

…buy his book anyway!  Chuck Wendig, the profane, logorrheatic fabulist that walks like a man, has perpetrated yet another literary outrage on the unsuspecting world.  (I keed, I keed!)  He’s funny (if just a tad PG-13) and talks a lot about being a penmonkey and how to do it better.  I suppose I should support a fellow writer, even if he DID steal the title of the second book in my SF series for his own nefarious purposes, forcing me to come up with YET ANOTHER title, which task nearly sprained my brain.

Oh yeah, the book is for sale.  Amazon. B&N. Indiebound.

And now… payback.  Pay attention, bdub.  Your homework is to successfully distinguish slot-head from Phillips screws 2 out of 3 times.

There’s an old writer’s joke–whenever we’re asked by eager newbies “Where do you get your ideas?” we reply with an involved shaggy dog tale involving a subscription idea service run by a little old lady in Schenectady.  The next best thing (and it really exists!) is Atlas Obscura, “a compendium of the world’s wonders, curiosities, and esoterica”.   Want to know where the largest collection of books bound in human skin is located?  Who the “Crystal Maiden” is?  It’s all there, and you can easily get lost going from one weird and wonderful thing to another.  I defy you to not get a story idea going through that site …

Readers and Writers, Unite!  You have nothing to lose but a lot of really boring books filled with futility and self-loathing!

We’ve started a movement.  A literary movement, even.  Human Wave SF.  We’re still deciding the rules, whether we’ll have rules, logo, etc. but we’ve got a website so you know we’re legit.  The splendid and worthwhile Sarah Hoyt asked the question “Where’s the sense of wonder in science fiction anymore?”.  Lots of people discovered they had the same question, and wondered what we could do about it.  So, we are bringing Sensawunda back!  The plan is to have a hand-wavy kind of general agreement about what we are promoting, then we’ll collect up writers who want to be identified with our particular brand of insanity, list them on the blog, collect already published books to point to as examples for the curious, and stuff like that.

1.  Somebody wins.   So far it’s always the heroes, after much struggle and sacrifice, because that’s what I like to read.  But somebody has to win, and something has to happen after 300+ pages.

II. Having Fun is a complete and sufficient defense.

D. Remember you are competing for beer money.

5.a A character’s race, species, age, gender, gender identification, sexual orientation, presence/lack of sexual activity, political donation history, hobbies, physical pathology, national origin (except Belgians), ranking in the Meyers-Briggs scale, handedness, musical preference, or tendency to carry a grudge for all eternity is NOT DETERMINATIVE of virtue or guilt. For the Avoidance of Doubt, that means:

iii. The Reader does not wish to be beaten over the head with your Moral Message for Mankind. (see rule D).  Yeah, yeah, you have something to say but you don’t need to hire a lecture hall.  Negative example–Ayn Rand.  Positive example–Terry Pratchett.  He’s got lots of message and meaning but he lets the characters play it out for you.

404.  If Technology is Evil, Why are you Wearing Clothes? (Corollary: If Corporations are Evil, why do you have an iPhone?)  It is our happy hominid nature to poke things with sticks and figure out how they work.  Then we figure out how those things can be useful to us.  This is why we are not currently lion kibble on the Serengeti.  Personally, I prefer this scenario.

g. Nature is Stupid.  It’s just very big and there’s a lot of it so it can kill you quite easily, but it doesn’t, per se, care.  Or think.  Respect it like a huge brain-damaged poisonous  snake, but don’t worship it or ask it for investment advice.

401(k) Your Book Will Live On.  Try not to have a worldview determined by today’s headlines.  Thirty years from now, will your readers know or care about ${PoliticalScandalDuJour}?  At the time people cared a great deal about the election of Millard Fillmore.  Now, not so much.  For extra credit, look up the profound repercussions of the Pig War.  (Yes, actual declared war between the US and Britain that nobody remembers.  No joke.)

3a4d. Puzzles are fun, Science is cool.  Let your characters figure out the world around them and discover new things.  Let your readers figure it out a little bit ahead of the characters.  This releases serotonin and promotes relaxation in both body and wallet.

Exemplars, past and present:  (writers who get it)

Eleanor Cameron (oh come on.  The Wonderful Flight to the Mushroom Planet??? Classic!)