Wow, that was fast. I uploaded the file late last night, and not only is it live I’ve had one sale!

I’ll be updating the online store this evening, with luck, for those readers who like to get their ebooks fresh from the writer. Thanks for your patience, everyone, and enjoy!

As promised!  In the spirit of the Holiday Season, whichever present-giving holiday you prefer.  A selection from the beginning of my new book Scent of Metal –now undergoing final rewrite. A tale of science, courage, and Pluto…

The emergency survey team moved down the rough-surfaced corridors at a jog-trot, looking for changes.  The air was dry and cold, with no scent.  Lea Santorin did her best to keep up, holding panic at bay by trying to figure out when things had gone wrong.  It couldn’t have been their ship; after all there had been at least three ships from Earth before Kepler and nothing happened.  Removing the alien…device hadn’t done it.  But she had, just briefly, put the thing back in the niche where it had been found.  The surface ablation of the ice layer had started shortly after.

Ivars continued his careful, quick sweep of the corridor like he hadn’t heard her, weapon always pointed where he looked.  “If you know that, then you know how to fix it.”  The other soldiers behind her didn’t even pretend to pay attention to the conversation, and Dr. Adi was still slack-jawed with horror and shock.

END_OF_DOCUMENT_TOKEN_TO_BE_REPLACED 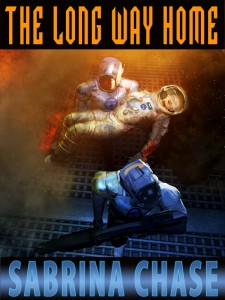 Webspace pilot Moire Cameron is one of the best–but even she can’t fly her way out of a catastrophic drive failure that triggers a time-dilation bubble.  Left suddenly eighty years out of date, she is on the run in a world she no longer knows, caught in the middle of a human-alien war while agents of Toren hunt her for the information only she has–the location of the pristine world of Sequoyah.

Well, this is going to be a whole bunch of experimental.  The Long Way Home is the first book in the Sequoyah trilogy, an optimistic science fiction tale of relativistic side effects, aliens, adventure, and promises kept.

Reasons Why You Should Read This Book

The Burma-Shave shaving cream company came up with a grand advertising plan back in the 1920’s — a clever little poem, with each line on a separate sign, spaced out along the roadside.  You had to pay attention to get every line and complete the rhyme, and they always ended with the sponsor’s name.  Sometimes extolling the improved dating prowess of smooth-chinned men, sometimes giving humorous driving safety tips, they entertained many a long boring road trip.  An example: 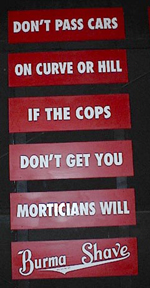 It just so happens that “Burma-Shave” maps rather nicely to “Human Wave”, and my evil mind proceeded accordingly.

Come out and play

Spurred by my bad example, others have joined in on the fun … (these two courtesy of Phil Rose)

So let’s all go

Readers are encouraged to perpetrate their own attempts in the comments, and to spread these rhymes far and wide along with the Human Wave link!