Now that the Kindle Select experiment is concluded, Firehearted is now available for those who prefer the epub format.  I still think Select worked very well for me — Firehearted is selling nearly twice the volume as The Last Mage Guardian.  There’s been some sell-through from one to the other but they are different kinds of fantasy, and it shows.

The SF trilogy is being edited even now.  I will keep you posted on its progress–I’m quite excited to get it published!

How do you name characters that are outside your cultural milieu?  Let’s say you have a character, a Greek woman.  What will you name her?  Leaving out the usual deities, that is.

-Try a phone directory!  Lots of names, unfortunately they are all in Greek.  You could, if desperate, transliterate them to the Roman alphabet.

-International clubs that have membership lists.  These could be clubs you belong to, or clubs that have membership lists open to the general public.  For example, the International Association of Cytology.  They have Greek members, and the list is in Roman letters!  I usually use the American Physical Society, of which I used to be a member, which sent out its entire membership listing as a searchable database on CD.  You do have to weed out the expat members working in foreign countries, but you can usually find at least a few of each country to give you ideas.

-Find a cultural club or organization connected to the area in question.  Alas, searching on “Greek Societies” gets you a lot of fraternity houses.

Be aware that there could be cultural implications to naming that aren’t obvious to outsiders.  For example, a Sunni Muslim would not have the name Ali, but a Shia could.  It has a religious affiliation connotation impossible for Muslims to ignore.

Writing science fiction is fun.  I know, I do it myself.  Having a degree in physics isn’t always a help, though, since the kind of stuff I wrote up in my thesis would take waaaay too much explication to put in a story.  It would be the mother of all expository lumps, and that would just be to explain why the photoelectric effect is wavelength-dependent.  (Just trust me on this, OK?)

So, you want to write sciency-type stuff in your story and you don’t have a science degree.  As I just showed, that can be an advantage–but you still have to find ideas somewhere.

Please, for the love of Ghu, don’t get your new cool science ideas from any publication that has classified ads or a byline involving the AP, Reuters, or BBC.  Bless their hearts, they try (sometimes) but they usually get it wrong or the editor hamfists the story to make it “fit”.  You need to go where the science geeks go to catch up on news, like PhysOrg.  Not only are these stories that usually haven’t hit the newswires yet (meaning you aren’t following an old trend) but the articles usually have links for more information *and* are written for non-specialists.  I would also avoid any site that mentions “chemtrails” if not IMMEDIATELY followed by the online equivalent of pointing and laughing. END_OF_DOCUMENT_TOKEN_TO_BE_REPLACED

Hie thee over to Red Tash’s site, for she has kindly given me the opportunity to do a guest post!  Learn all about my sordid past, or at least the part where I turned to writing in Despair.  And what, you may well ask, is my connection to Red?   (Besides phenomenal writing skill, amazing stories, etc.) It appears we have readers in common and her book shows up in my also-boughts and vice versa.  Her Cunning Plan is to spread the word to our readers that haven’t figured this out yet, so of course I said yes.  Rumor has it that Red will appear *here* at some point for her own guest post!

I suppose I should dust, or something…

This is the valid kind that is a totally reasonable excuse for not writing for a while. If your writer’s block doesn’t have soft floppy ears, GET BACK TO WORK!

A Day Spent Fishing is now available on Amazon and Barnes & Noble .  While it has some fantastic elements, this is a more introspective, reflective story on the cheery subject of Death.  Plus, another selection from The Long Way Home!

Speaking of which, the first round of art for the cover of The Long Way Home is complete and is making me chortle in glee.  Les Petersen, my artist (see sidebar for link) is a very cool cat.  Progress is being made!

Coyote and the Amazing Herbal Formula should go live Sunday on Amazon and Barnes & Noble.  Be aware–it isn’t exactly R-rated (no actual sex) but Coyote’s detachable…member features (cough) prominently so it isn’t for maiden aunts or people with poor giggle control.  I was never able to sell this story to any publications, because it isn’t raunchy enough for erotica and it was a bit too “adult” for everyone else–although I got very nice rejection letters saying how much the editorial staff had enjoyed reading it and laughing until they could hardly breathe.  Such is life with a twisted mind like mine ….

And of course, a new excerpt from The Long Way Home is included!

UPDATE: You can haz links.

I’m still seeing the happy effects of the Kindle Select free days, two weeks later.  For one thing, a number of very nice reviews were added on Amazon (and even one on a separate site!).  Many thanks for the kind words.

I’m also pleased that the free copies of Firehearted seem to have boosted The Last Mage Guardian’s sales too — and the short story probably benefited as well.

Editing progresses on the trilogy.  Besides the tidbits in the short stories I’m putting up, I’m thinking of posting some excerpts here too.  Plus, work is planned to clean up and streamline the site, adding the direct sale option, and filling in some of the blank pages.  I had no idea there was so much administrivia involved in setting up a business, either.  Now that the glaciers have receded (for now) here, I can get more work done!

My second book, Firehearted, is currently enrolled in the Kindle Select program.  It’s an experiment, and I recently took a look at the numbers to see if the two days free had any global effect.

Other indie authors have been very generous with their data to help others, and I want to follow their example.  During that week Firehearted was downloaded over 1,200 times.  My first book The Last Mage Guardian , not free and not part of Kindle Select, sold 25 copies.  However during the previous week, it sold only 16.   I am hopeful that when the legions of readers finish their free book, they will feverishly search Amazon for my other work and find Last Mage Guardian and its numbers will increase even more.  So,  by the end of the month, maybe?

But wait, there’s more!  Prior to the free promotion, I hadn’t sold anything in Amazon’s separate foreign stores (UK, Germany, France, Italy, and Spain).  During the promo week 38 copies were either sold or downloaded in Germany (none in the other stores).  So somehow the Kindle Select program got me foreign readers, an effect nobody else has mentioned.  (And why only Germany?) Is a puzzlement!

The Correct Way to Fill Out Form PCR-103-u, a very silly story of bureaucracy, grape soda, and alternate dimensions.  Now available on Amazon and Barnes & Noble for the piddling price of  $.99. 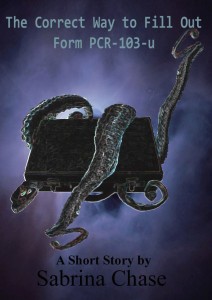 This also includes a short excerpt from the upcoming science fiction book The Long Way Home.  I’ll be putting up at least two more short stories, each with a different excerpt from the book–so collect the set!

Curiously enough some of the events in the story were inspired by things that really happened to me during a postdoctoral stint at the Naval Research Lab in DC.  A very, very strange place …